Busting Tech Myths: Macs can get viruses, too!

There is this extremely popular notion that Apple’s operating system Mac OS X is completely invulnerable to viruses and all other forms of malware. The truth is, that while most experts agree that Macs are structured and engineered to better resist malware, the possibility of infection is still there. Most PCs run on Windows OS which is why most hackers create malware targeting Windows PCs. However, as the population of Mac users increases, more malware creators will definitely start targeting Macs. 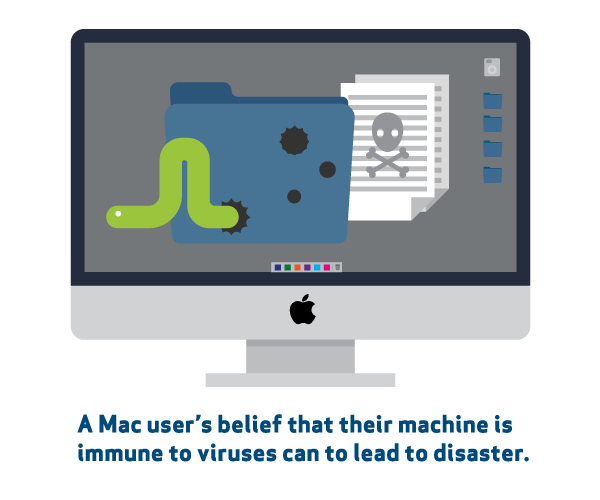 A Mac user’s belief that their machine is immune to viruses can to lead to disaster. First, security updates are rarely issued, which leaves Macs susceptible to new kinds of Malware. Second, Macs don’t even have a means of notifying the user if the machine gets infected. Third, since Mac users believe they do not need to worry about malware, they typically do not think of installing third party antivirus programs.

Malware is short for malicious software. It refers to any software that is intended to cause harm to a workstation or its user by disrupting normal operations, stealing sensitive information, or granting unauthorized remote access to the hacker. Malware can be can be classified into the following categories:

Infectious Malware: malicious software that is designed to spread to other machines.

Concealment Malware: malicious software that operates without the user’s knowledge and does no spread to other machines.

Most third-party antivirus software is optimized for Windows. Hence, installing it on your Mac may lead to significant reduction in speed and performance. Therefore, getting the help of an expert is often the best choice. Dynamic Quest specializes in internet security and has access to antivirus suites that are optimized specifically for OS X.