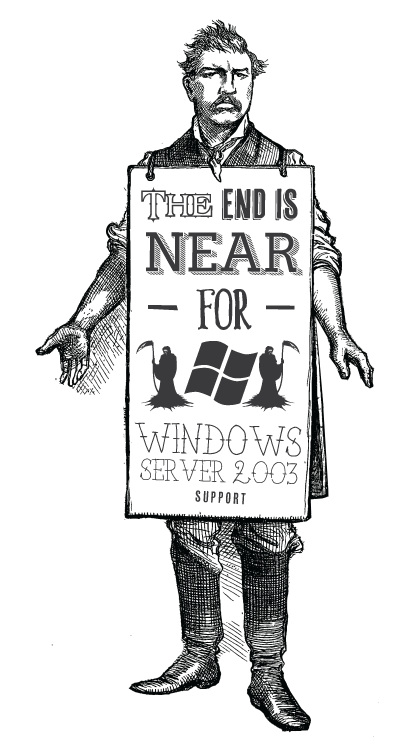 Windows Server 2003 EOS has a potential for a pretty big data security risk for those who still haven’t upgraded from the now decade-old version. For this reason, Microsoft made early efforts to communicate this with its own service provider network as early as possible. They even issued a public announcement in April 2013 (over two years in advance) in order to be sure there was ample time for anyone on the nigh-extinct platform to upgrade to one of the two newer versions. Microsoft has issued strong discouragement about continuing to use Windows Sever 2003 after July 14th , and it is providing upgrade and migration support resources and supporting rationale to help make the decision easier for you.

IDC research partnered with Microsoft to examine the server upgrade scenario, the report for which Microsoft provides on its EOS support pages. IDC states some key reasons why they strongly recommend the upgrade, with which we here at Dynamic Quest are in full agreement.

Four newer, better versions of Windows Server have been released in the last 12 years.

If you’re still running Server 2003, take a minute to think about what that really means. It’s been 12 years since it was released. There have been four releases between then and now that provide better, more powerful and secure server options. It’s served you well, but it’s time to say goodbye to this frankly old and outdated OS.

Server 2012 R2 has a 64-bit platform that is built to support your legacy 32-bit applications, providing they operate in user mode rather than kernel. This means that if you haven’t upgraded because you’re worried your current applications won’t work after the upgrade, you can stop biting your nails. The vast majority of your older applications will most likely be able to install and run without any hiccups on the much-improved Windows Server 2012 R2.

The enhancements are worth the trouble.

Take a look at the list of enhancements in the server upgrades before determining that the risk is worth avoiding migration. There are real benefits to upgrading, including:

The list keeps going. Windows Server 2008 and 2008 R2 have enhancements as well, but it’s only time before they phase out, too. If you are upgrading, we recommend making the leap to 2012 R2.

Security gets scary after EOS.

Aside from a bad noncompliance scenario, if you stay on 2003 past the EOS date, you run some very real risk of data and network security concerns. You may not realize it, but mainstream support actually ended back in July of 2010. For 5 years, you haven’t had access to hotfixes, free charge incident support, or warranty claims. You’ve been sputtering along with one engine, just getting trickles of security updates and nearly no support. Now, everything ends on July 14th. No more fixes for any reason. No more knowledge base access. No more updates. You’re dead in the water, and no one’s coming to save you when the sharks come.

Why does Windows send so many security updates? Because there are boatloads of bad people out there creating bad programs to come and snatch up your data. Those waiting as long as possible before an upgrading should realize they’re hitting that red zone where waiting has put them in danger.

Our best advice is to bite the bullet and do the upgrade. Do not put the security of your data at risk. Regardless of whether you choose a partner to help or undertake the upgrade yourself, you should get moving.

Make a plan to migrate your 2003 server’s files, applications and data to a currently supported platform (we suggest Windows Server 2012 R2). And though it may not be possible to make it happen before the July 14th cutoff, try to begin as soon as possible. The whole process can take between a week to months or more depending on your organization’s size, experience, and what needs to be migrated. The sooner you begin planning, the better!

Alright, take a breath. We promise there is a silver-lining to all of this. Sure, migration is an investment, but you do stand to get a return on it. Migration presents a chance to clean house and build a solid foundation for the next phase of your business.

Think about everything that’s happened since 2003. You wouldn’t want to be using the same computer you had twelve years ago. You know, the one that could barely run Diablo II. Think about your poor application or file servers puttering away on dusty old copies of Server 2003. That’s no way to run a business. It’s time, my friend. It’s time to move on.

If that heartfelt appeal didn’t move you, consider the practical reasons for ditching Server 2003. Moving to a supported platform will ensure compatibility with future software. Developers will be glad when they don’t have to make their newer, faster (and more resource-taxing) software work for that dinosaur. Continuing to use Windows Server 2003 might also land you in regulatory and compliance troubles. Many states do not issue compliance certificates to businesses that use unsupported software. Compliance certificates are necessary for a business entity to be duly recognized as capable of making and receiving online payments and entering into other forms of online transactions. The list goes on and on.

So, now that you are incited to action and ready to make the move, organize your migration using the following process:

Identify and catalog all programs, applications, databases, etc. that you have running on Windows Server 2003. Make sure that nothing is overlooked.

Analyze each item on your catalog. Items should be categorized based on a variety of factors, including type, importance, and degree of complexity for migrating the item. Such categorization will make it easier to select items that should be prioritized.

Determine a target destination for the migration. If your organization has yet to do the move to the cloud, this is the perfect time to do it. It is expected that most businesses will be joining the cloud (fully or in part) in the near future because of the reliability, efficiency, and scalability that cloud can bring. You might want to consider making the move just so you won’t get left behind.

The final step needed before you can proceed with the move is choosing a migration plan.

Whether you take it on yourself or get some outside support, please get moving if you still are sitting on a stack with Server 2003. If the move still seems daunting and you need support, there are numerous companies that can assist you through the entire migration process. Of course, we here at Dynamic Quest are ready to help as well.

We know that many organizations, especially Small and Medium Enterprises (SMEs) will find it difficult to migrate. To help them find the best way forward, we have developed an effective, efficient, affordable migration package that will allow any company to perform data migration without a hitch. We have successfully helped plenty of our clients make the move. So if you are on the fence, give us a shout and let us help you.